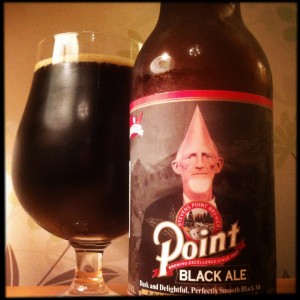 A friend of mine told me he’d tried this and that it was more like a dark lager than a black ale.
Opening a bottle for myself I can see what he means, though that’s not a complaint.
Point Black Ale pours inky black with a light ring of bubbles for a head.
The smell is a slightly metallic forest fruit and liquorice, in fact it smells like I remember cans of Coca Cola smelling.
That metallic tang you’d get drinking straight from the can.
The flavours are soft and hazy, a little less intense than I was expecting.
You get a good chocolate and marmite malt complete with subtle bran biscuit base, all soft focussed and fuzzy.
The hops are crunchy dry leaf litter with a peppery snap, all very nice but leaving a finish that’s rather gentle and a little too fleeting.
All round it’s not a bad beer, and I rather think the metallic thing is more to do with me having a dud bottle than anything else, and my friend is right.
This might be an ale, but somehow it feels like a lager.