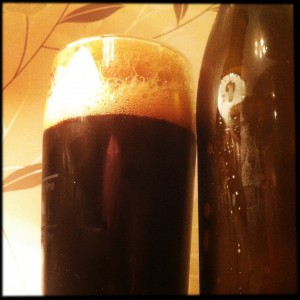 I’m almost stuck for where to begin and I almost want to apologise for the words I’m about to write.
You may think that I’m only writing good things because this is a home brew I’ve been lucky enough to be sent for free.
But you’ll just have to trust me when I say that this Imperial Stout would make most professional brewers jealous.
This beer sat for a week on coffee beans and French oak chips that had been soaked in Maker’s Mark Bourbon during secondary fermentation.
If that wasn’t enough, it was then moved off the chips and beans and rehydrated Cadbury’s cocoa was added to it.
Then it was left another week before bottling.
The result is a Stout that you’d happily pay serious money for and immediately fall in love with.
It pours an impenetrable inky black with the most gorgeous thick cappuccino head.
The smell is a rich fug of black coffee, chocolate, rum and a hint of cigar smoke.
And then you take a swig and everything is unctuous and plump and comforting.
There’s the most enormous boozy chocolate that I imagine feels much the same as lounging in a bath of fine Belgian Liqueurs.
And then, as the beer warms, the Bourbon starts to come to the fore along with a good deep espresso, a liquorice stick and a few jelly sweets just for fun.
The hopping is super brittle, dry woodland foliage and camomile tea, and the finish is all hot chocolate, booze, brambles and more booze.
This is a seriously good beer.