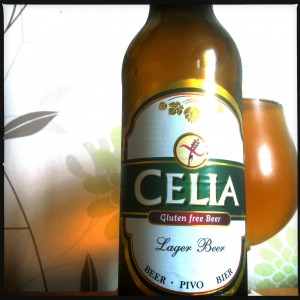 This is a gluten free lagered beer suitable for Coeliacs and it’s not bad.
It sits in my glass a nice golden yellow but its head doesn’t hang around too long.
The aroma is peppery pear juice and honey, crisp and fresh.
The malts are burned sugar and shortcake biscuits sprinkled with spices, and there’s a very nice herbal tang to the leafy hops that leaves a decent clean bitter sweet finish.
Celia isn’t bad at all and is certainly one of the best gluten free beers that I’ve tried.
That said there’s an oddly metallic taste left at the back of my mouth that I remember from other gluten free drinks.
Could it be something to do with whatever process is used to remove the unwanted components?
However, if I was bought this is a bar I’d happily drink it and if I was a Coeliac I’d be immensely pleased to have a beer with so much flavour that I could enjoy safely.
I gave a second bottle of this to a friend of mine who happens to be a Coeliac and she tells me that it’s not the best lager she’s ever had but for a gluten free beer it’s really good and that she’d be happy to drink it.