A few weeks ago I fell out with a brewery. Not in a face to face sort of way. In the ways of the modern world, we fell out virtually. Probably a good job, because when I Googled the brewery later the brewery looked rather like a brick shit house and the brewer like a prop forward.

The reason for our falling out? I had described one of their beers as “Very Average”. On Untappd. No big deal really. Sometimes you get a “so pleased you enjoyed our beer” auto response. This was a person. Apologising for my experience. I am British, so apologised back. And promised that I would try again. How come this was my fault all off a sudden? But I was invited to give them a ring if ever I were in the area. As I never get to Devon, I really never thought our paths would cross 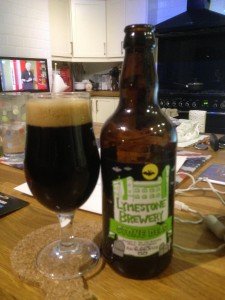 So, last week I was in my favourite bottle shop and there was a selection by the same brewery and I followed up on my promise and bought a couple. And you know what, they were actually pretty good. I was giving 3.5 stars rather than 2. So I told him via Twitter, we seemed to part as friends – virtual. Then I looked the brewery up properly. Seems that I was missing an “e” and substituting a “p” and this brewery was not associated with a Royal Marine camp but was, rather based in whatever you call the area between Cannock and Stoke (That would be the Potteries I guess). So when, early this week, I was summonsed to a meeting in Runcorn, I thought that I might detour off the M6 and actually go and visit.

I remind myself that this is actually supposed to be a beer review – I get carried away! But bear with me. So I pulled off the M6 at junction 15 and allowed satnav to guide me down increasingly narrow roads until I arrived at what was, effectively, a Victorian Industrial Estate. The brewery was pretty much in the middle. Fairly non-descript from street level. Walking in to “reception” I could choose from the toilet, a door advising me not to even think about leaving it ajar, and a third door, unmarked. Not unwelcoming, probably the best bet, so I took it. And was faced by a huge pile of kegs. And a cheery sort of chap, not exactly dressed all in fur, from his head to his foot, but well wrapped up – it was pretty bloody cold when you were in shirt sleeves as I was.

I explained that I was after some bottled beer and was welcomed in. The brewery explained, history and all, it was an entertaining tale. This is a youngish brewery – five years old this August. With plans for expansion and it’s first pub under its arm. Half way through I coughed that I was the complete bastard who dissed their beer – I was coming to understand how easily you can dent reputations, even via Untappd. A warm handshake and we talked for twenty minutes more. I left with 12 bottles of what I really fancied the sound of, having done my research.

Tonight I brought my haul home and cracked a bottle open. It claims to be an Imperial Stout and my word does it fill the bill. Maybe not Russian Imperial, it is only 6.6% after all. Dark and luscious, it is pretty much what you want from a stout (maybe a porter) with a resounding alcohol hit. I loved it. The wife liked it. I have another eleven to enjoy. The brewery? Lymestone. Based in an historic brewery site, run by a really decent bloke, one of that breed of brewers who works bloody hard but will still take the time at the end of his day to talk to some arse who turns up, unannounced to talk beer. Ian Bradford – @lymestonebrewer – I salute you. I look forward to the remaining Stone Dead and will be back for more.