A Brace Of Beers From Mobberley Fine Ales

I decided to lump these two reviews together for a reason that will become apparent as you read through.
Rather like that realisation you sometimes get as you work your way down a glass of beer.
The realisation that what initially tasted OK has turned nasty on you as you reach halfway.
I tweeted last night that I wasn’t impressed by these beers and was met with a response from a friend who simple said, “Fine can often mean mediocre these days.”
Based solely on the evidence of these beers he’s got a point. 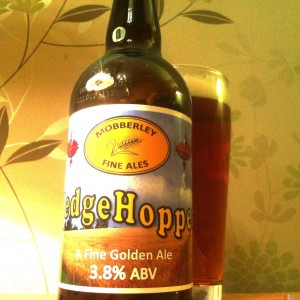 Hedge Hopper (3.8%) is a Golden Ale that pours a decent light caramel and has a big fluffy head.
The aroma is apples and toffee, toffee apples in fact.
Hedge Hopper begins as a decently balanced beer with a gentle digestive and caramel malt and hops that taste a little like chewing leaves, nettles and dandelions to be precise, all with the tiniest twist of lemon.
But lurking in the background is a rather unpleasant and very harsh mineral burning flavour that only became apparent as the beer warmed in my glass and that by halfway through had left me not wanting to finish the pint. 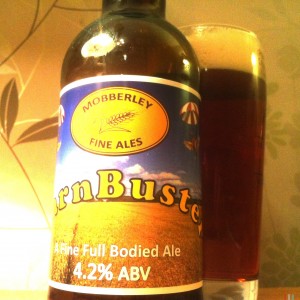 Barn Buster (4.2%) is Mobberley’s “Full Bodied Ale” and I’m not sure how they’ve done it, but it’s almost identical to their Hedge Hopper.
It’s a darker colour, and maybe there’s ever so slightly more biscuit in the malts, but other than that see above.