A Pair Of St. Austell Specials 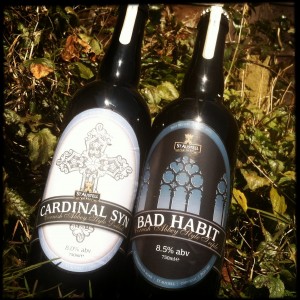 It would seem that someone at the St. Austell Brewery likes Belgian beer.
My guess would be it’s the Master Brewer, but whoever it is, St. Austell have gone ahead and brewed two beers in classic Belgian styles, one a Trappist Double and one a Golden Triple, packaged them in dangerously greedy 750ml bottles, wrapped them in lovely labels, the caps covered in a very cool “Limited Edition” sticker, and stuck them out in the world for people to enjoy.
I got hold of a pair and decided that the only decent thing I could possibly do would be to drink them all to myself. 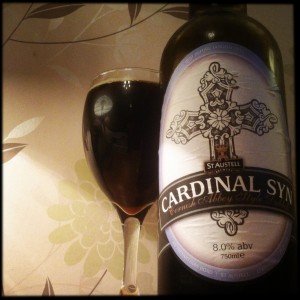 Cardinal Syn (8%)
Inspired by the beers of the Abbaye Notre Dame de St Remy and described as a, “Cornish Abbey Style Ale”, Cardinal Syn does all the right things.
There’s a very good balance to this beer with just enough fizz to make it sparkle on your tongue and a real depth of flavour.
The beer pours a deep mahogany and smells of liquorice, orange peel and Dandelion and Burdock.
There’s a big star anise hit when you take a mouthful, it’s round and meaty, a little Marmite floats around the edges and there’s some malty biscuits right at the base.
Then there’s a layer of fruit, lots of blackberries, some strawberry and a big slosh of apple juice.
The hops are zingy lemon zest, hazel leaves, old fence posts and coriander.
And then in the finish the Dandelion and Burdock, this time laced with a little rum, comes back and brings with it some lovely earthiness, damp woodland leaf litter and a sticky resinous sweetness that invites you back for more. 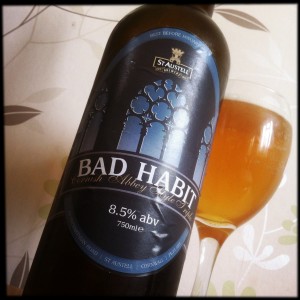 Bad Habit (8.5%)
St. Austell’s take on a Belgian Triple is really rather super and easily my favourite of these two limited bottles.
Bad Habit looks all innocent, sitting in my glass a light golden with just a wisp of bubbles for a head.
The aroma is spiced apples and pears, a little bergamot and some fig, and this continues into the flavour.
In the first mouthful there’s a sharp snap of green wood and a very nice stinging nettle and bramble leafiness, and underneath it lurks mace and apples, a slosh of pear juice and a crunchy peppery spice that builds as you drink.
It may look all innocence in my glass, but Bad Habit is well names as it’s deceptively easy to drink, hiding its ABV very well, it’s all I can do not to glug the whole lot in one go.
So as my head begins to swim, hanging around in the corners of this beer there’s a little star anise, some lemongrass and a surprisingly delicate honeyed brioche.
The finish is long and bitter and dry and reminds me rather a lot of Delirium’s Tremens.
Where Cardinal Syn was good, Bad Habit is terrific.