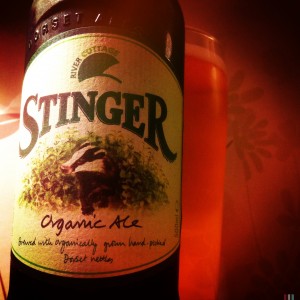 I noted un Untappd while drinking this that Stinger is too boring to review.
I stand by that statement and so here’s a review that explains why.
Stinger is a Golden Ale.
Nothing wrong with that.
It looks like a GOlden Ale and it tastes like a Golden Ale.
A little light caramel sweetness on your tongue and a little light sweetcorn and honey up your nose.
And then a little light zing of something vaguely citrus and the vaguest leafiness.
There’s certainly none of the “Tongue Tingling” that the label proclaims.
I suppose it’s not a bad beer per se, it’s just a very very ordinary beer.