Last night I was invited to host BeerBods‘ Twitter tasting and I had a very good time.
For those of you who don’t know, BeerBods is a drinking club where members have beer delivered to their door and then drink together and discuss each beer online.
I like the idea and it certainly fits with the social aspect of our own Campaign For Really Good Beer, and reflects the Twitter events that we’ve hosted ourselves. 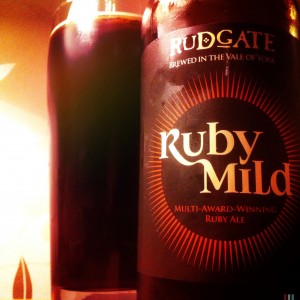 Rudgate’s Ruby Mild is a big satisfying toffee apple of a beer.
It pours a deep dark mahogany and smells of caramel and biscuits and stewed fruit, and there’s fruit in the malts too.
Lots of plums and prunes and a big helping of treacle toffee and bruised apples that reminds me of bonfire nights.
Everything is warm and round and delightfully soft, plump and comforting, but don’t be alarmed, you won’t be engulfed by a big beery pillow coated in rum and raisin chocolate.
That’s because running amok over all this softness there’s a sharp and beautifully bitter hedgerow hop.
Nettles sting and brambles pluck at you, autumnal blackberry leaves crunch and there’s a soft wash of dandelion and burdock that leaves a liquorice tinged, dry finish.

A big thank you to the chaps at BeerBods and to everyone who took part last night and kept me up past my bedtime.