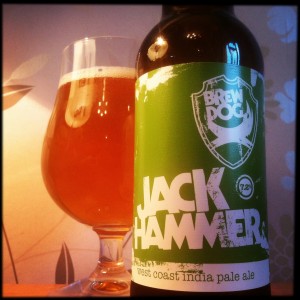 Now this is more like it from BrewDog.
This is the kind of beer I remember them making when I first had my head turned by them a few years ago.
Jack Hammer is a mega bitter, hugely hopped, sexy beast of a beer.
The smell is sharp acidic lime juice and wood shavings and the beer sparkles in your glass all shining and golden.
I have to admit I was taken by surprise by it being bottle conditioned and as a result my glass was a little cloudy.
I took a big slurp and immediately felt like I’d sucked all the fizzy and sour jelly sweets the world has ever made.
Ever.
Jack Hammer may be superbly bitter, but there’s a delightful fruity caramel underneath and it licks your cheeks and soothes you as the hops whip you with their citrus nipple tassels and strut around offering favours for small change.
Lip singeing lemon and lime, lychee, grapefruit and mandarin zest, just a dab of battery acid, then honey and a pinch of salt zip around your face and leave you puckered and gasping but wanting more.