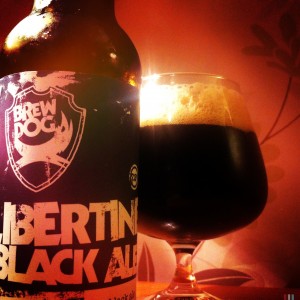 Described as, “Twenty first century black ale,” I don’t half get fatigued with BrewDog’s incessant attempts to sound cool and tough.
But then I drink a beer like this one and I pretty much forgive them of everything.
This is a great little beer, and a beer that I’m pretty sure in a blindfold test you’d say, “This is the BrewDog.”
It pours as black as tar, looking for all the world like a thick and sticky Stout with it’s espresso crema head.
But it smells of fruit juice and sweet shops laced with curry powder, like a modern Double IPA brewed on Leicester’s Golden Mile.
Taking a swig there’s a biscuit malt that’s got a light smoky chocolate coating and a sprinkling of pencil shavings, it’s round and woody and thuggishly there.
An unmovable beery object.
And over it there’s an enormously fun, snappy, zingy hop that’s full of sharp grapefruit juice, satsuma skins, lemon pip and bay leaves that build up into a scorchingly dry but honey softened finish that simply refuses to leave.
It’s brewing like this that helps BrewDog remain so vital.