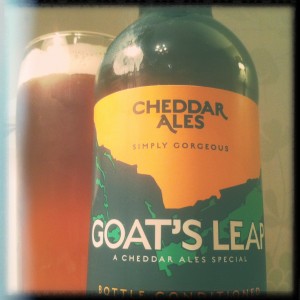 I recently grabbed a bunch of beers from Best Of British Beer as they stock a bunch of breweries I’ve not seen before.
This is the first beer from my mixed case and it’s a really decent IPA.
Goat’s Leap pours a solid amber with a creamy white head and its smell is straw, apricots and Werther’s Originals covered in spice.
There’s a good sticky toffee malt right in the middle of this beer and everything else revolves around it, with lots of crunchy biscuit, walnuts and caramel, all gooey, woody, well baked goodness.
The hops are oily and resinous with plenty of orange peek, dandelion leaves, lemon pips and birch bark, and the finish is bitter and spicy, long and dry.
I have a couple more beers by this brewery in my delivery, so I hope they’re all as good as this one.