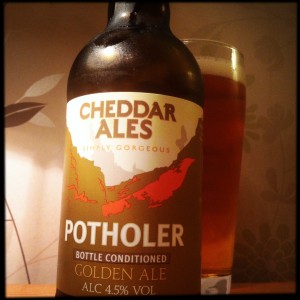 Potholer, though not overly exciting, is a pretty decent Golden Ale that pours an unsurprising, but still rather nice, golden yellow with a nice fluffy cloud for a head.
The aroma is incredibly subtle with just the faintest hint of citrus and straw.
There’s a lot of hay and biscuits in the malts, a drizzle of honey and a little peach and pear juice.
And then the hops give a good bramble prickle, nettle tea and a hint of thyme before a bitter sweet and rather good gently dry finish.
ALl in all it’s rather enjoyable, but there are so many beers out there like this that it becomes a little unremarkable.