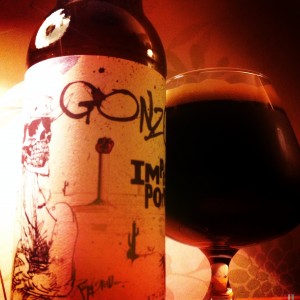 I’ve had this little bottle of wonderfulness before so I’ve no idea why I’ve not written about it before now.
This is a frighteningly excellent beer.
From the Ralph Steadman bad acid label to the black hole purple darkness of the beer, Gonzo is great.
For the three or four people who’ve never read Hunter S. Thompson, Gonzo is a type of descriptive, subjective, whacked-out journalism that became an art-form, a way of life.
And this beer is well named, embodying much of Gonzo’s warped sense of fun.
For a start it’s mind bendingly alcoholic, thick with the smell of prunes and plums, nuts and hard liquor.
And then there’s liquorice and biscuits and more booze.
If you dare take a swig you get assaulted by bran rich biscuits pimping semi clad, high as kites red fruit, and tamarind wearing nothing but chocolate sauce.
The hops are stupefied, drunken bums wrapped in vine leaves, grape skins and redwood bark jackets.
They can barely stand but they’re happy to shout obscenities at you from their slumped position on the back of your tongue.
I love this beer even as it pokes me in the eyes with jelly sweets and cigar smoke, shouts knife sharp abuse and then legs it.