Hops In A Box: A Project By Meantime Brewery 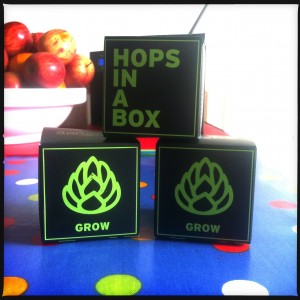 This morning I received a small white parcel.
Inside it were three little black boxes with the words “Hops In A Box” printed on the side.
And inside each of the boxes are a packet of hop seeds, a tiny plant pot, fertiliser and instructions on growing your own hop plants.
I’m really taken by the idea, and yes I know it’s a clever bit of marketing on the part of the brewery, but it’s a non-corporate, user friendly, educational and fun bit of marketing.
The idea say Meantime is that they want to get people involved in the beer they drink by getting them to think more about the ingredients used and where they come from.
Now, I write about beer, I love beer, I get a bit obsessive about beer as many of you know, but I’ve never once wanted to brew it*.
I’m a writer not a wronger as Cud once sang.
I know my limits.
But I do like gardening and I do have a spare bit of garden fence up which hops could climb and look all green and lovely.
And so it is that I shall be growing hops and taking part in Meantime’s ongoing #hopsinabox Twitter event.
If you’d like to get involved or just want more information then take a look here.

*My day brewing with Shepherd Neame back in January was fun but made me realise just how much I’m a drinker not a maker.