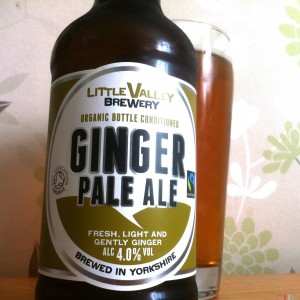 What a disappointing beer this is.
It promised a lot but is more than a little insipid.
Ginger Pale Ale pours a nice enough colour and the aroma is lightly spiced apples and straw.
The problem is that this beer lacks body, it’s all thin and watery.
There’s an initial ginger kick that’s nice but fleeting and it leaves behind, well, very little.
The faintest caramel malt and the lightest smack of citrus in the hops, and then a whole lot of water.
And then, right at the end, there’s a chalky powdery dryness left on your tongue that’s not all that appealing.
I really want to like this brewery as I very much like their attitude towards being organic, Fair Trade, vegan, but they keep falling short with their beer.
What a pity.