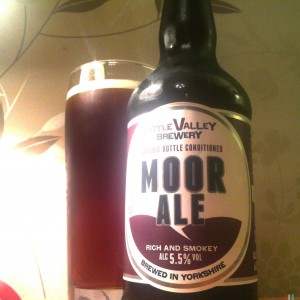 Little Valley Brewery is based near Hebden Bridge, the odd little artist garrett type town that one of my favourite bands, Bogshed, came from.
I don’t know about now but back in the 1980’s and 90’s Hebden Bridge was a weird and eccentric town that seemed overstuffed with musicians and artists.
And Little Valley’s Moor Ale is a slightly weird and eccentric beer.
It pours a decent ruby and smells of leather satchels, chewy cola bottles and damp moss.
There’s a distinct earthy peat smokiness to the flavour, like being shrouded in moorland fog while smoking a cigar.
Hidden under this fug is a little red berry jam with a side order of sideboard and your strange old uncle’s leather waistcoat.
I’m not painting a pretty picture am I?
That’s because the further down this beer I got the less pleasant these flavours became.
They started out as strange and interesting and just became strange.
Towards the end you get a slosh of unripe apple and a pitchfork full of mushroomy farm yard stuff.
And all this contained in a sweaty leather pouch.
Eccentric isn’t always a good thing.