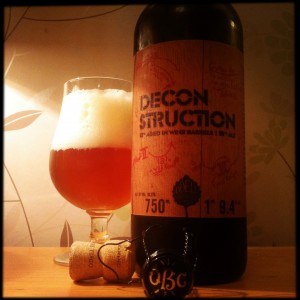 This is an enormously dangerous drink.
Why?
Simple.
It’s drinkable to the point of forgetting that it’s heavy with booze.
And I hate to admit it but I think I may be falling in love.
I’m getting the same overwhelming feelings of beery lust I first got with Pretty Things’ Jack D’Or.
So excuse me if I go all misty eyed and my pen turns all lyrical.
Deconstruction is a blended beer, a Golden Ale created by, “blending the final recipe with its own barrel aged pilot beers fermented with wild yeasts and lacto.”
There’s a ghost in this beer, maybe it’s the ghost of each pilot brew wanting to be tasted, but I undid the cage at the top of this bottle and an invisible hand slowly slid out the cork for me.
It took two or three long seconds as I watched it slowly move out of the neck of the bottle and then with a pop and a wisp of magic it was free.
The smell is heavenly, spun sugar, white wine, apple juice and the singed wings of naughty fairies.
What the barrel ageing appears to have done to Deconstruction is to make it feel as though you’ve left the barn doors open.
There’s the essence of fresh evening air and untreated wooden doors complete with rusty hinges at the heart of this beer.
Out of them comes rushing a flood of honey, straw bales, watercress and unicorns.
You’re given a brandy snap buttery sweetness that kisses you gently and winks knowingly as it swaggers round the back of the farmhouse to snog the face off the plastered hops.
They’re stingingly sharp shards of sexy sapling stalks dribbling mushroom laced vinaigrette and spitting lemon pips to beat you into submission.
And all the while there’s booze by stealth.
It comes on like a warm autumn breeze and then, once it’s up close, it breaths sweetly into your ear to let you know that you’ve become uncontrollably dizzy, before shaking its tackle at you and reminding you that mythical creatures don’t exist.
This is sublime brewing.