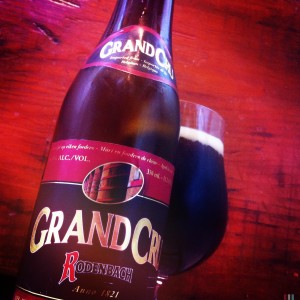 I really like sour beers at lunchtime.
Don’t ask me why as I can’t really be bothered to get all psychoanalytical about it other than to say there’s something about the crisp bitterness that I find refreshing in just the right way early in the day.
Rodenbach’s (which most of you will know is owned by Palm) Grand Cru is a blended beer made with aged and new beer and is a bit of a classic.
As such I’m writing this more for my own notes than to tell you lot what this beer is about.
It has a rich and woody backbone and is awash with under-ripe fruits and hints of field mushrooms and blue cheese.
There’s damp straw too, and it’s wrapped around a tasty chewy toffee, a bunch of raisins and sultanas and a few crumbs of shortcake.
The finish has a stickiness to it that, according to research that I spent all of two minutes on Google researching, may be to do with the addition of sugar to the fermentation.
That could well be psychosomatic (and I’m sure someone more knowledgeable in beer will put me right), but that might explain the slight candy floss sweetness that Grand Cru leaves behind.
Not my favourite sour beer by any stretch, but not bad.