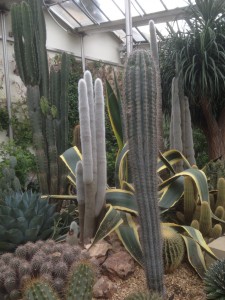 If Friday had been a muted BeerX experience, Saturday promised to be a mix of old school GBG favourites intermixed with a few new kids on the block. First though, some exercise to burn off some of the beer from the previous evening. Sheffield, like Rome, is a city built on seven hills so the opportunities for stretching leg muscles are plentiful even if you can’t quite be bothered to take advantage of the beautiful countryside available just beyond the city limits.

So a morning wandering the leafy suburbs and parks, taking in some comedy cactus moments at the Botanical Gardens and the opportunity to stock up on the excellent Henderson’s Relish – a true Sheffield craft product if ever there were one.

Which meant that there were some mildly tweaked muscles in need of soothing when we arrived at the University Arms, shortly after one o’clock. This is a former club for University of Sheffield teaching staff as I understand it and it retains something of that feel. Being early, it was largely empty save for the odd visiting sixth former accompanied by parents in town for a departmental open day – either that or the poor girl was called Psychology per her name badge, and the three of them were generally in the habit of  discussing the merits of old school v new school university cities (Lancaster v Sheffield in this case) as they enjoyed a lunchtime refreshment. I opted for a Bengal Tiger by Concertina, washed down against a soundtrack of the Smiths, I could have been back in the early 80’s waiting for lectures, but I am thinking that the Tiger was probably somewhat superior to the Stones Best Bitter that I was drinking in this area first time around.

Having sat for twenty minutes or so we regretted the lack of opportunity to properly warm down those flexed muscles as the downhill elements of the walk towards Kelham Island reminded us that we were both pushing fifty and felt like it. I have heard it said that the Kelham Island Tavern – a consecutive winner of the CAMRA Pub of the Year Award – is not even the best pub in the City, never mind the country, but to give them their due there is always a good range of the traditional real ale alongside newer offerings – this time an Are there any Women Here from the previously untried North Riding Brewpub, which provided lashings of nutty loveliness to wash down a splendid pork pie and chutney, which looking back on it seemed amazingly cheap at under £4 for the full size version. 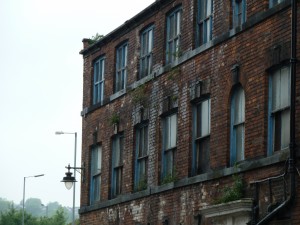 Time was edging on and we were conscious of two things, firstly we had both made separate arrangements to meet people later in the day, and secondly, we wanted to catch some of the rugby, although an England Championship decider would never make easy viewing. Those of you who care will know what the score was so no further mention of the latter, but the former did rather require that both of us were capable of coherent speech by eight pm. Hitting the streets again we girded our loins for the fifty yard walk that takes you to the Fat Cat on Alma Street. I can remember this place having an almost mythical presence when we first heard of its existence in the early 80s. In the days before Google Maps a pub down in the decaying streets of Sheffield’s cutlery district was as elusive as elusive could be and we failed to find it on numerous occasions. No such problems today. It is small. It is another old school CAMRA pub – you are unlikely to see much craft keg in here anytime soon, but, like the Kelham Island Tavern had a good selection from the ubiquitous Timmy Taylor Landlord to, and beyond, the Salamander BC Casts No Shadow that was my choice. It proved to be a very decent session style beer for the time of day. And you always seem to end up talking to people in the Fat Cat. Maybe it is the size of it, or maybe contented people are just happier to fall into conversation, but a discussion about vintage motorcycles with a couple at the next table helped eek out the beer. And if you are that man in the amazing Belstaff jacket: YOU HAVE TO GET THEM OUT ON THE ROAD – PLEASE!!! 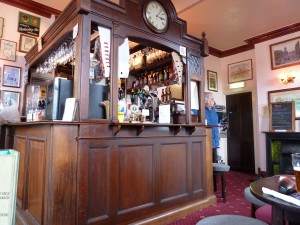 I am torn as to whether Chiron or Kipling remains my favourite Thornbridge beer. I opted for the former at DAda, their latest bar – just past the Cathedral Quarter that proves that, whilst no York or Norwich, the Steel City is not all grisly ’60s office buildings and new build student accommodation. DAda probably caters for the occupants of the latter with its hard grey lines and utilitarian seating. Beer was good though and we probably probably visited at about the right time. Not sure that it would be my thing later in the evening. 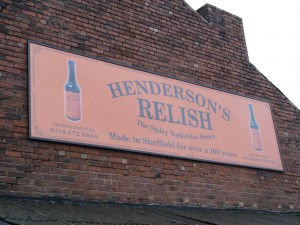 The Devonshire Cat is another pub to split opinions. No doubting the range and quality of both the draft and bottled beers, but the Harvester feel of the place doesn’t do it any favours and you sense that a refit will be needed in the not too distant future. I enjoyed the beer from Raw Brewing Company at the recent Craft Beer Rising and was pleased to see their Corrosion of Conformity on offer. It doesn’t actually feature on the brewery website so whether it is a new brew or a special I can’t say, but it was sweet and bitter all in one mouthful and I gave it a reasonable score on Untappd. You may recall mention of rugby earlier. And this was where we watched the first fifteen minutes of that wretched game. It was sufficient. As were the curry sauce and chips from the Devonshire Chippy that constituted our only one of five for the day. 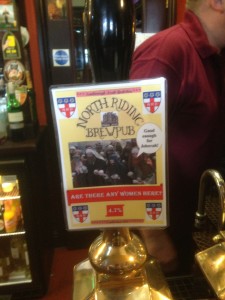 One more pub. Shakespeare’s. Re-opened in 2011 it has brought another venue for lovers of great beer. We are on halves. The conversation is flowing as new friends arrive and others move on to meet other friends. The day has been about beer and the record keeping falls by the wayside. I know that I wanted hoppy light beer. And I got it. It was all very nice. Truefitt BC’s Erismus Pale was the last thing that I registered. The skies opened and the rain hammering against the windows reminded you what a great place an English pub can be. In all honesty we barely scraped the surface, of either the bars or the beers available here. It is a great walking city, a great city for beer and I know that I will be back for more.