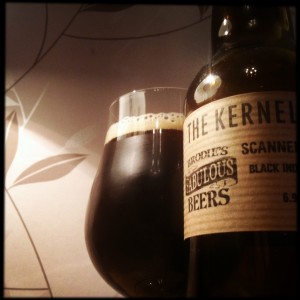 As I recall Scanner Darkly is a book by the wonderful Philip K Dick, whose books I used to devour and, if you’re at all interested, of which Ubik was my favourite.
(Oh, and I’ve just been told by my wife that it’s now also a film starring Keanu Reeves).
Scanner Darkly is now also a beer collaboration between Evin of The Kernel and James of Brodie’s, and it’s a rather fine Black IPA.
The bottle opened with the most gorgeously fresh tropical fruit and cheap sweetie mist and poured into my glass a deep, dark chocolate with a good creamy foam head.
In the glass the smell is said fruit, lavender and a touch of patchouli oil.
Very 1970’s.
There’s a background Marmite meatiness in the malts, along with an enormous crunchy biscuit and some raisins and honey.
Then there’s a helping of thick treacle toffee with a dash of liquorice that creates a super chewy body.
The hops are an ultra fresh blast of mango and guava, pineapple, hazelnuts, flower petals and a final splash more patchouli that reminds me of the days of denim waistcoats with Iron Maiden patches on them.
So, what we have is a super beer with NWOBHM and paranoid Sci-Fi connotations.
I couldn’t ask for more.