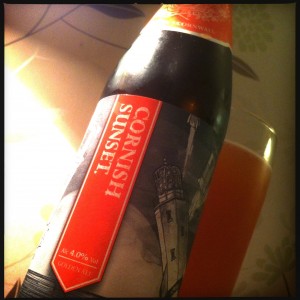 After my excitement at how good Rebel’s Penryn Pale Ale was I suppose I could only be disappointed with Cornish Sunset, the brewery’s Golden Ale.
It’s actually a pretty good beer, it just not on a par with their Pale Ale.
I ought to admit that it’s not been helped by my ham-fisted pouring that gave me a thick yeasty soup, resulting in me not really being able to tell you what this beer looks like.
The smell is lightly fruity and spicy and the flavours begin with shortcake and honey, a little apple juice and some sweetcorn.
The hops are satsumas and mandarins, apricots and dandelions, leading to a sharp, dry finish.
All in all a decent beer, but not a patch on Rebel’s Pale.