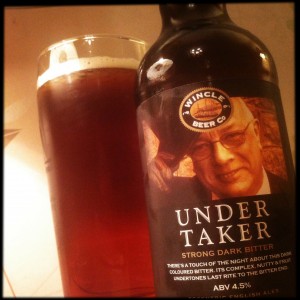 This is a very good and rather satisfying beer that pours a rich red conker with a light creamy head.
The smell is toffee, a little rum and raisin, and just a touch of liquorice.
Undertaker is a malt driven Bitter thick with treacle toffee, peppercorns and apple cores, stewed red berries and lots of bran rich biscuit.
There’s a good hop here too.
They’re damp autumn leaves, dandelion and burdock, stinging nettles, chives and a squeeze of lemon that leaves a very nice lingering bitter finish.
All in all a solid, rounded English Bitter that I’d like to have as a go-to in my larder.