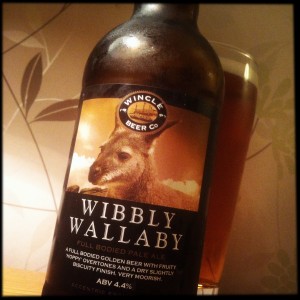 Silly name for a beer.
Named after some toff’s menagerie that died until only the wallabies were left.
Good beer though.
Wibbly Wallaby is a super Pale Ale built on an earthy and biscuity malt with a lovely biting hop wandering all over it.
It pours a warm marmalade orange with a little frothy head and a smell that’s full of chewy sweets, toffee and pear juice.
The main body is caramel and apple on good digestive biscuits wrapped in straw, and the centre bits form Maltesers.
You know, all malty honeycomb goodness.
The hops are zingy with citrus, floral and crisp, and the finish is a long biscuit tinged leafy dryness that lasts an age.
A very good beer with a rather silly name.