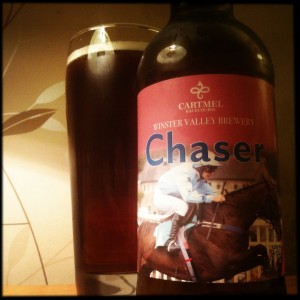 Brewed on site at the Brown Horse Inn in the Lake District, this is a rather good Best Bitter.
Cartmel Chaser pours the colour of a chestnut mare and smell of horses.
It doesn’t really.
It smells of fudge, toffee apples and cinnamon laced fruit cake.
There are lots of prunes and plums and shortcake biscuits form the malts, along with some mustard seed and a big bruised apple core.
Just before the hops kick in you get a rather nice hint of liquorice and tamarind.
And then the hops bring sharp, spiky citrus zest and hawthorn prickles, rosehips and dandelions that help leave a finish that’s equal parts honey sweet and flower border fresh.