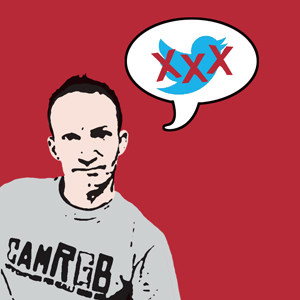 Last night I was reminded of a valuable lesson that I had learned once before and obviously forgotten.
If you have something you want to say and you drink more than you should, it’s a very good idea to put down your iDevice and back away from Twitter.

I am an idiot.

You see yesterday I was told that an article was published in this month’s issue of CAMRA’s Beer magazine in which I am mentioned in terms of my graphic design work and being in a band.
I didn’t see the article in the magazine, but instead I read it from a photograph of the article which was sent to me.
What I had really wanted to say was that I found it rather amusing and a little bit frustrating that there was no mention of CAMRGB in relation to me, and that the article had echoes of CAMRGB in it as I have often talked about music and beer in the CAMRGB blog, including likening Marble Brewery’s image to that of Factory records, the branding of Revolutions Brewery and on more than one occasion likening beer geekdom to record collecting.

But what came out of my mouth via Twitter was rude and irresponsible and upset the author of the article greatly.
Made even worse by the fact that I met the author last year in Leeds and we sat and chatted for the best part of an hour in The North Bar, got on well and exchanged contact details before going our separate ways.

And so, after waking up at an ungodly hour this morning with a banging headache and a sick feeling in the pit of my stomach about my actions last night I would like to humbly and unreservedly apologise to Mr. Glynn Davis (@glynndavis), writer and beer lover, and hope that he might allow me to buy the first drink next time our paths cross in the real world.

Founder of CAMRGB. Member of The British Guild Of Beer Writers. Leftist bigmouth. Old and grumpy.
View all posts by Simon Williams →
This entry was posted in CAMRGB and tagged Glynn Davis. Bookmark the permalink.

One Response to An Unreserved Apology To Mr. Glynn Davis