Dear reader.
I wrote the following review last night while high on brilliant beer and as a result I may have gotten a little over excited.
I’ve decided to publish it exactly as it was scribbled, but would like to say that for the record there are other breweries out there too. 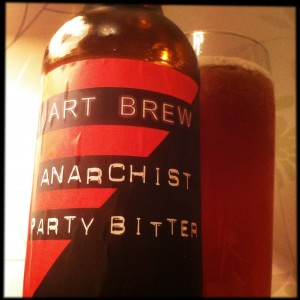 Hell yes!
Just in case my attention was being taken by other breweries, Art Brew swagger in kiss me with tongues and take my breath away.
Again.
This is a slightly dangerous thing to say, but in many ways Art Brew are the embodiment of CAMRGB.
Their beer fits the “rules” of our friendly other beer organisation, but their attitude is bright and modern and, well, full of attitude.
They make beer that tastes exciting just because they can, they insist on having fun with their beer, on sticking two fingers up to boring brown beer, and they smile A LOT.
And I also love the fact they’ve named this the way that they have.
It reminds me of the weird old days buying Citizen Fish records and listening to Crass.
But this is a beer review so let’s talk about how it tastes.
Huge an stupid that’s how.
Anarchist Party Bitter smells like a mantlepiece covered in dusty brass framed photos of fallen left wing revolutionaries.
The malts are a bit leathery, like a knackered jacket with a Cravats badge pinned to it and stuffed with toffee, popcorn and the remnants of broken Police truncheons.
The hops, or should that be hop as this is all Nelson Sauvin, are lip witheringly bitter, sharp like herbal glass shards and packed with penny sweet juiciness straight from the dribbly chin of your childhood.
Come the revolution brothers and sisters, you’ll find me face down after drinking this.