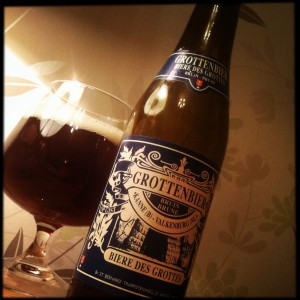 We may all talk about Belgian beer in hushed tones.
Well, a lot of us anyway.
But that doesn’t mean to say that every single Belgian beer is brilliant.
Here’s a case in point.
Grottenbier is brewed by St. Bernard whose beer on the whole I like, but this is all a bit flaccid.
It promises so much too, a Brune brewed with herbs, but even as you pour it looks a rather thin ruby red with its loose, almost lazy head.
The aroma is fruity and very very gassy.
Taking a swig I get a treacle tart malt with a touch of tamarind and some aniseed.
Then there’s hops that are lightly floral and have a citrus edge, but as a whole this beer feels almost as though it has been watered down, everything is out of focus, thin, missing the body you would expect from this type of beer.
How very disappointing.