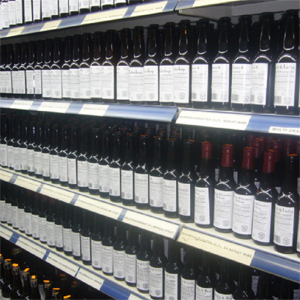 Cotteridge Wines in Birmingham is becoming something of a Mecca for the discerning beer geek and I get a fair amount of my special beer from there.
The thing is, I’ve not even visited the place yet, having sold my car a year ago I don’t get around too much, but I’m fortunate enough that a mutual acquaintance of myself and Jaswinder, owner of Cotteridge and member of CAMRGB, picks up my purchases for me and I simply need then to pop into Leicester to collect them.
This actually makes my beer buying quite exciting as I’ve only ever seen tiny photos of the beer I’m buying on my iPhone’s Twitter feed, and sometimes I’ve only read a description or seen a name.
As a Graphic Design nerd this means I get a double whammy of exciting beer to look at and lots of lovely labels and packaging to explore.
From discussions and connections online it appears that lots of people are beginning to feel the same about this little shop in the Midlands and people are travelling from far and wide to visit.
And so I intend to get over there this summer, probably on the same weekend that I visit the @birminghamcubed Craft Beer festival.
This week I picked up my box of goodies and nestling inside were a couple of beers from my favourite brewery, De Molen.
They’re a pair of De Molen specials, high strength beer aged in barrels and presented in wax sealed bottles.
I could barely contain my excitement. 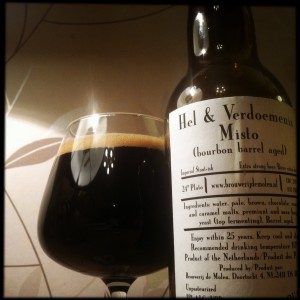 Brouwerij De Molen Hel & Verdoemenis Misto (Bourbon Barrel Aged) (11%)
I’ve not had anything from De Molen for ages and so opening this brought tears of joy to my eyes as I was instantly reminded of why it is that I love this brewery so much.
The bottle was beautifully wax sealed and as the cap popped my nose was filled with warm rum and drunken fruits.
The beer slouched in my glass looking absolutely sure of itself, a deep red black and immensely sexy.
As I took a sip my tongue was assaulted by a massive chunk of bitter chocolate, and this forms the base from which this beer builds.
There’s sticky treacle, brandy snaps, heaps of stewed plums and a little sponge pudding laced with a crunch of mixed spice.
But it doesn’t end there with star anise and lavender swishing in before a dew damp booze soaked oaken woodiness starts to drift over you, slightly blue cheesey and wrapped in a fug of earthy wild mushrooms.
Oh, and there are hops too.
They’re barky, green, pithy and herbal and they cut beautifully across the rich sticky coffee chocolate and rum finish of this super little beer.