It is a quarter of a century since I last lived and worked in London. Back then our youthful stomping grounds were Islington and the West End rather than John Lewis and Homebase as they are now. Not been back a great deal in the meantime, what with having children and such. The £30 return train ticket for a ride of less than forty miles but which took over an hour meant that a trip up to the Smoke, with the Significant Other, was heading towards a Tonne before you had cleaned your shoes and put on your best titfer. As a result, if it wasn’t between Marylebone and the office (Warren Street) I was completely unaware of it and not really that bothered.

Which is a bad thing, or good thing depending on how you look at it. Because, having moved on to a rail franchise that manages to offer its customers both fast services and the occasional special offer, we started to go back into London for the day. Always on a Saturday and always without children. We have done it three times now and seem to have discovered something new each time.

So This weekend we set off for the Capital, no particular itinerary just a vague notion of Borough Market, Brick Lane and Hackney. On foot. Ideally with as little reference as possible to a map, but with a couple of key apps on the iThing. The meander from Euston to Southwark took a reasonable hour and a half, with few distractions given that the pubs were not yet open. The skyline dominated by the Dome of St Paul’s and the slash of glass that is the Shard, we managed to surprise ourselves with a couple of discoveries, the medieval (looking, at least) museum of St. John – of Ambulance fame – and the access to the river via narrow alleys and steps plunging down towards jetties that seemed almost Dickensian.
And then, across London Bridge to the madness that is Borough Market. Entertaining madness, but madness all the same. Is it different during the week we asked, are the tourists fewer in number, are there proper market porters ferrying goods hither and thither? A bottle bought. Not, as you might think from the excellent @utobeer, rather a small and reassuringly expensive bottle of olive oil followed swiftly by sausages of the air dried variety. What is it about a market that warps your mind into thinking that £10 for three really quite small pieces of charcuterie is a bargain to be had?

A check of the watch. Twelve o’clock is a perfectly acceptable time for a beer on a Saturday to my mind so we popped into the Market Porter. This is a bar with a write up in Craft Beer London, the App of choice today, and they have it pretty much spot on. Lots of hand pulls, mostly for the types of brewery that require a bit of research as you drink and some Meantime keg. Last time we were in this neck of the woods we had visited @therake, and to be honest, I wish we had this time too. I had an Orkney Brewery Dragonhead Stout, which tasted of bitter chocolate, but the overall experience was a bit too sanitised, as if the soul had been sucked out of the place. We moved on.

@utobeer may not be the largest bottle shop, certainly not the cheapest, but there is a decent selection and it seems churlish not to pick something up as you pass by. That said “something” will need to be carried for the rest of the day is the only downside, oh and the hole in the pocket that £10 bottles of beer will cause (cheaper beers are available and not all of today’s selection were that expensive by any means). That and the fact that one of the bottles (Goose Island Bourbon County 2012) was a present from the SO eased the damage. 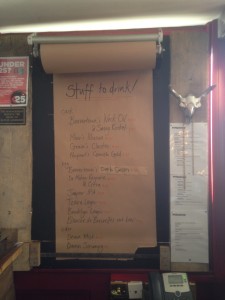 Heading North of the River we are building a stock of brownie points. Miles walked to be exchanged for goodies later. So far, 90 minutes of walking has been rewarded with a single half pint of beer. Not sure when the halves happened as preferred measure to be honest, but they will serve us well later in the day when the ABVs start to rise. Brick Lane is 50 minutes away by the nose led route we are taking. Tower of London, Gherkin are the sights of note before we start to hit the narrow streets of the East End which is still, somehow, stuffed with what look like olde worlde buildings that I thought the Germans had raised to the ground sixty years ago. As a destination, Brick Lane has little to offer unless you have a yearning for junk – sorry bric-A-brac, second hand anything and the obvious curry. That the place is full of young folk buying clothes and stuff is probably all you need to know, oh and the street food at the old boiler house remains excellent. BrewDog Shoreditch was an obvious resting point. It remains gritty and un-finished. The beers are as to be expected – this is a brand after all – the bottles in the fridge look enticing in a “just how expensive a mistake have I made – sort of way. A Libertine Black Ale is followed by a 5am Saint, the latter smacks of tamarind and coal tar soap. Not what I remember from the bottle but really rather good. Oh, and they have power sockets under a lot of the tables – very welcome as the iThings are chewing their batteries as we walk. 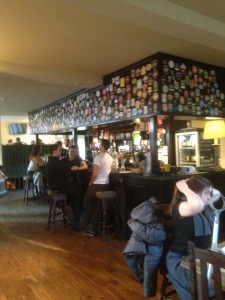 Beavertown is a brewery that I have enjoyed from a distance for a while. London focused boxes from @alesbymail and some of my own selections have featured their beers and they are one of those engaging breweries that interact with folk on Twitter – which I consider to be well mannered and pleasant behaviour. So Duke’s Brew & Cue is next. We walk past Brown’s on the way. Music is pulsing. If you don’t know, don’t ask, but it is likely that you may never have been on a Stag Party in East London. Duke’s is a bit odd. Feels like a trattoria. With a bar attached. Somehow not very cohesive. A lot of beer on offer though, but only two of their own (Neck Oil and Smog Rocket) on tap. Good though – we have both. Followed by Gamma Ray in a bottle. How can a 330ml 5.4% beer be £4.50 odd at a brewery tap – can anyone explain? Also tried a Grain Brewery Year of Hops (Cascade) which was much as you might expect and was a good hop hit.

But a swathe of Thornbridge was not really what we were after, familiarity and all that. The App was now coming into its own indicating that The Fox, a few hundred yards away, was worth a punt. Not wrong. It is a large corner pub that has been opened out into a single room, with a raised bar against one wall. Dark Star Brewing Co’s Porter was everything that you would want of the genre. Sierra Nevada Northern Hemisphere Harvest Wet Hop Ale had strength, but little else and will be consigned to the “tried, not to be re-tried” folder.

App time. North Pole. Another mile walked. This place has been nicely brought up to date. Friendly staff, friendly customers. The Stag Party that had dogged us in the last two bars left behind. London Fields and Buxton are both breweries that I have a lot of time for, so Love Not War and Wild Boar respectively. Liked the latter over the former, possibly on strength grounds. And we still need to get back to Euston. Home is calling, we need a stop over at The Craft Beer Co in Islington. 19 by Mikkeler. They intrigue me and I remain to be convinced. But this was the beer of the day. Cloudy. Pear drops. Wife not impressed but I loved it.

Home then. 12 miles walked and the odd beer sunk. Next month we are heading to London’s Brewing, which promises 30 London breweries. Should be good.