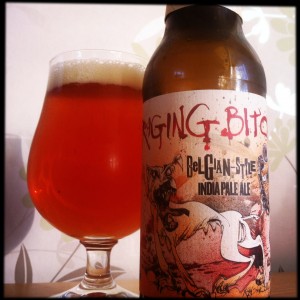 I do like this beer a lot, it’s just I’ve only ever had it in pubs before and so I haven’t been in a particularly fit state to make any notes about it other than grunting something along the lines of, “Urrghh, blah, beer, grrrr, yum.”
Or some such.
But actually that pretty much sums up Raging Bitch.
You see this is a “Belgian Style India Pale Ale” and it’s big and meat-headed, like some beery Neanderthal, a monosyllabic booze driven thug.
Pouring the colour of cigarette stained fingers with a feisty bubbling spittle drenched head, the smell is brandy, yeast, nutmeg and apples.
The booze punches you square in the mush the second you raise the glass to your lips as though taunting you to dare take a sip.
The malts are thick and gloopy, with toffee sticky enough to glue your eyes shut, and a woody resin you could weatherproof fences with.
There’s a Belgian yeast that hates everyone, especially you, and as a result pounds away at you with a sour dough night stick.
The hops are sizzlingly dry and red, oily and acidic, they strip the skin from your tongue and dab salt on your wounds, before a finish that’s heavy with honey and cloves and comes on as dry as all hell.
Raging Bitch is a great big snotty, bad mannered beast of a beer and I love it.