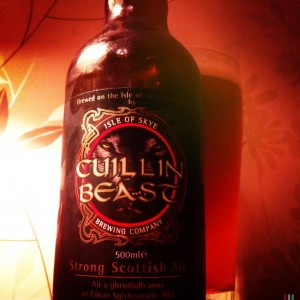 Cuillin Beast is, supposedly, a strong Scottish Ale but it’s rather disappointing.
It pours a decent if slightly vapid copper but even the smell is a bit odd.
The smell is a bit fruity and a bit sweet, but there’s a weird cold water smell, like a big gap in the aroma.
And that’s how it tastes.
There’s a bit of fruit and a bit of toffee and some alcohol and then a great big space where something else ought to be but where actually there’s, well, watery nothingness.
No body, no substance and certainly none of the bite you might expect from a beer of this style.
To sum up then, Cuillin Beast is rather frail and rather thin and not half the beast it should be.