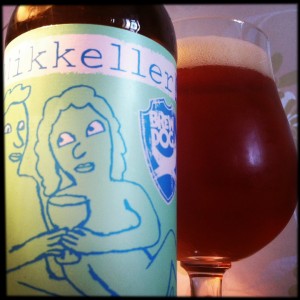 It’s taken me a long while to get around to trying this collaboration between Mikkeller and BrewDog and I’m not sure I like it as much as everyone else does.
There’s a viscosity to the way this deep amber beer sits in my glass.
It looks dense and sticky and smells intense, all nail varnish and pine resin, citrus fruits and jelly sweets.
To my mind this is a far sweeter beer than either BrewDog’s Hardcore or Mikkeller’s I Beat You from which this beer springs, with a big, no not big, enormous toffee and candy floss, and cooked marshmallow that gives you a bitter tinged sugary gloop that coats your teeth before being scraped away by the brutal hopping of this beer.
Lemon and lime peel, pine needles, sour fizzy sweets and a shed load of dandelion leaves and flower petals thump away at you as your senses are screwed with by the massive booze hit.
And the finish?
Sherbet fizz, apple cores and citrus zest so sharp and dry it’s like rubbing tin foil across your fillings.
The overriding feeling though is that this isn’t the best balanced beer, and it really is very sugary sweet indeed.
So much so that by the last few mouthfuls I just wanted it gone.