Mikkeller Not Just Another Wit (7.6%) 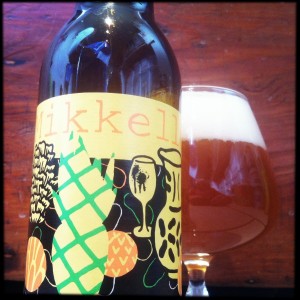 Have I finally found a Mikkeller beer that’s not that great?
This is certainly not on a par with anything else I’ve had from this brewer.
Not Just Another Wit pours a very bright and sunny gold with a big fluffy cloud for a head and smells of lemon curd, hyacinths and passion flowers.
There’s a lot of apricot, pear juice and mace with just a vague hint of caramel in the malts.
And then the hops attack.
They attack with a lemon and coriander punch that gets so lemony that it begins to overwhelm everything else and leaves you with a washing up liquid lemony assault that wipes out any of the subtleties you might have hoped would appear as you drink.
So yes, I have finally found a beer from Mikkeller that I don’t think very much of.