You are only 50 once.
And it is clearly reasonable to expect special treatment from your nearest and dearest.
So this weekend we found ourselves in……………….Portsmouth. Not an obvious destination. Ever. To my mind it is the South Coast equivalent of Hull. One of those places that you only ever go to if work sends you. Or you are catching a ferry to somewhere far more interesting. But this was the choice of my dearly beloved. It was her birthday. Who was I to argue? 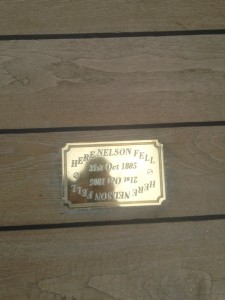 We arrived on Friday evening. Post work. The A34 living up to its reputation and the M275 link road a log jam of baffling proportions. Hotel found and an initial stroll into town. It is a blend of Georgian and ugly Elizabethan. With the smell of the sea to remind you that this is the home of the Royal Navy, ‘though Jolly Jack Tar is not really in evidence at any point during the course of the weekend. Dinner is booked at a well known chain bearing the name of an affable campaigner for school dinner improvements. We have an hour to fill. All Bar One is not what we have in mind but Fuller’s have a pub down in the Gunwharf Quays development that should fit the bill. Brit Hop is part of the Fuller’s seasonal ale series. It boasts no fewer than eight British hops varieties and is a Hardknott Brewery collaboration. Maybe they added only a small amount of each hop variety? In all honesty it is a bit boring and if you want hops, this is not the place to be. And, note to @fullersjohn, the pub does the beer no favours by serving it in glasses that have been through the dishwasher cycle so many times that they are more crazed than an ice rink. 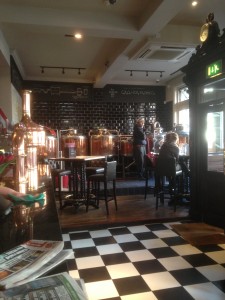 Dinner then. Clearly they are having “issues”. We pay for the starter and drinks. Everything else is comp’ed. Reasonable result given the experience. We will return for lunch, but not dinner. The management handled it well but it must have been an expensive night for the Naked Chef. The Curious Brew Lager on offer is first rate though. And if Gunwharf Quays and its associated shops and bars is at the forefront of the consumer economy in these parts, The Pembroke is rather old school. Classic street corner boozer offering classic street corner beer. Draught Bass no less. Hardly inspiring, but nicely presented and the welcome is warm.

Which is more than can be said for Saturday morning. There is sunshine, and a stiff breeze that is head on no matter what direction you walk. We have plans to visit castles and ships, to take a ferry the short distance to Gosport as there is a bottle shop on offer and I am a bugger for a bottle shop. Southsea Castle is ancient and perfectly enjoyable. The Oakleaf Brewery shop is manned by a guy who gives the impression that he wants to be elsewhere. His sales to me suffer as a result. The Royal Dockyard is impressive in its sense of history and the diminutive size of the country’s most famous battleship. Time marches on. Two o’clock. Beer o’clock? 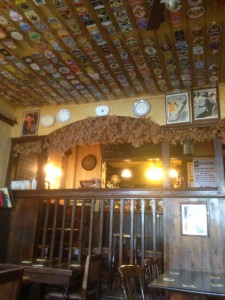 I like an App as much as I like a beer. In London, I find “Craft Beer London” to be a reliable source of guidance. There appears to be no “Craft Beer Portsmouth” in the App Store. Good Beer Guide it is then. And the first is a disappointment really. 1960’s community pub. Hard to find choose a beer from the variety on offer. All brown and of a similar strength (there is a mild). The promised porter is not in evidence. The Brains Milkwood is OK, St Austell Trelawny less so. The Hole in The Wall is a short walk away. And closed. Bugger. The chalk board outside talks of Brodie’s, Dark Star and the local Oakleaf Brewery. We have 45 minutes to fill. Too long to hang around. Then, the door opens. “Give me a minute” the man says, “may as well open early”. No complaints from this party. 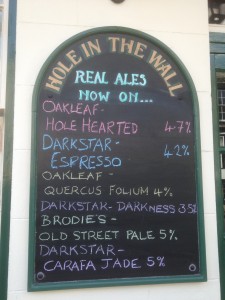 This is not a huge pub. GBG seems to think that it may be the smallest in the city. Doesn’t feel that small. Six hand pulls. The keg offering fails to register. I still have a John Smith’s mentality – need to sort that. Brodie’s Old Street Pale comes with a warning that it is “pretty hoppy”. No kidding. This is a hay field with a whiff of cow shed. Does it for me though. Dark Star’s Carafa Jade is Seville orange marmalade on brown toast. Search it out, it is a great beer. The Oakleaf Hole Hearted is pretty good too. Somehow reminds me of crispy roasted chicken skin. Remember that keg tap? Now it gets my attention. It is sort of hand written. Brodie’s. Saki IPA? Untappd hasn’t heard of it. Neither has the Brodie’s web site. The excellent Jon, who is the landlord, advises that it is described in the tasting notes as having the taste of cream soda and cheese cake. Ignore the tasting notes. This is 6% and tastes of Roquefort. I love it. So does the birthday girl. It may be my beer of the year.

A GBG minger is next. Limited choice (Doom Bar, Ringwood) and swear-tastic clientele. Onwards. To The White Swan. A rare thing this. A Wetherspoon’s disposal. JDW in the GBG is always a worry and this listing is for the JDW pub. It will probably be out of the guide next year having changed ownership. Now that will be a loss. “White Swan – Brewhouse and Kitchen” works very well. Urban bar rather than pub, it has the smell of a brewery. No surprise as the brewery is in the corner of the bar and the brewer is hard at work. Cleaning. Brewers seem to spend a lot of time cleaning. Admiral George Anson is a porter. Guildhall a smokey Kolsch. Both work well. Food is excellent and there is a good selection of bottled and outsider beers. If work sends you to Portsmouth then this is a place to search out. 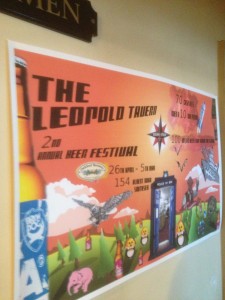 The Leopold Tavern is a step across town. It also has a bit of a beer festival on. Irving & Co is a local brewery. I thoroughly enjoy their Captain B Spiced Rum Ale which is a real taste of the West Indies, banana and all. Art Brew Spanked Monkey is also on offer and does not disappoint.

Time is moving on. We need to head towards “home”. The Hole in the Wall happens to be near our destination. We pop back. Saki IPA. And that is it. Thirteen miles walked. A good few new beers. I would recommend Portsmouth.
Did this sound like a 50th birthday for your wife?
Thought not.
But she did enjoy it.
Really.
No, really!

One Response to Play Up Pompey