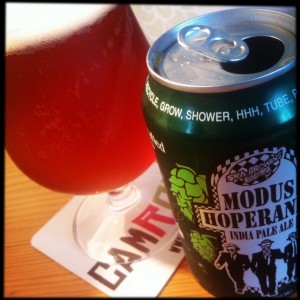 I’ve heard a lot of good things about this beer and following a haul from BeerRitz, I’ve finally been able to try it.
Modus Hoperandi is a really decent IPA with a rather familiar juicy and pine rich aroma that wafts up at you as the beer glugs from the can a deep and glowing amber.
There’s a big blob of gooey toffee and some slightly salted peanut brittle in the malts, rich and dense.
The hops are packed in here, lots of mandarin juice, thick woody pine resin, some herbal leaves and lemon rind.
All of this and a finish that’s spiky and spicy, dry and crisp, but tempered by a good honey roundness.
But by about a third of the way through I realised why this feels so familiar and it’s because however I look at it, it’s very similar to Sierra Nevada’s Torpedo, one of my favourite and regular go-to beers.
As a result I’ll stick with Torpedo as I can get it just down the road.
That said, if this popped up in a shop or bar, I’d more than happily guzzle it.