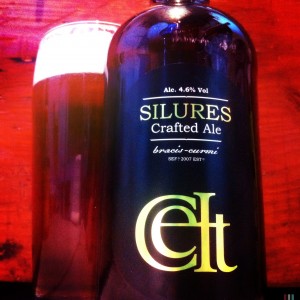 It would appear that those of us who in the past may have been happy to proclaim that Wales doesn’t make any decent beer really need to think again because here’s another example to sit alongside Waen and Tiny Rebel that proves everybody wrong.
Silures is a Pale Ale with massive attitude.
It pours a marmalade orange with a feisty head and has an aroma that’s nothing short of fresh fruit salad liberally sprinkled with flower petals.
This is a hop heavy beer, its bitter zestiness immediately scratching at your tongue and then laying on a whole bouquet of flowers, from marigolds and hibiscus to dandelions and daisies.
Hiding underneath is a decent crystallised sugar and brown bread malt that just keeps everything in check.
And it really is only just as the hops keep on coming, loaded with grass clippings and peppercorns they lead you to a finish that’s lime juice and grapefruit bitter, and really good and dry.
It doesn’t take any brains to realise that this is really good indeed.