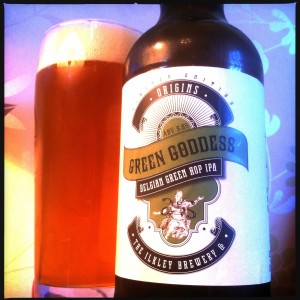 This is another in Ilkley’s rather good Origins series of limited edition brews, and this time it’s a green hopped IPA with Belgian yeast, Szechuan peppercorns, orange peel  and Nigella seeds.
It’s also another collaboration with Melissa Cole.
Oh, and I forgot to mention, it’s spankingly good.
Pouring a golden orange with a big pillow of fluff for a head, Green Goddess smells of satsumas and honey and ever so slightly of freshly opened tobacco, which is something I’ve not smelled since giving up smoking back in 2009.
I must admit I wasn’t expecting anything quite as subtle as this, the ingredients evoking something big and punchy.
But this is a lovely soft metallic tinged baguette, freshly cooked and coated in caramel.
Some spiky, zippy crushed peppercorns pop up, warm rather than hot and equally sweet and fruity.
The hops are resinous and floral, packed with fresh garden pith and a soft woodiness that rounds off a finish that sparkles on your tongue with an orange zest bitterness.
The Green Goddess is very nice indeed.