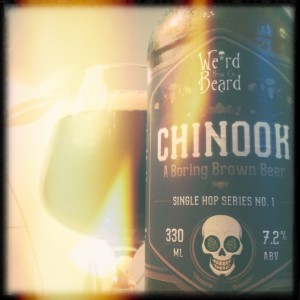 From the moment I saw this I loved it, it just looks so brilliant as well as coming across with effortless cool by calling itself, “A Boring Brown Beer.”
But there’s nothing boring at all about this sexy little bottle of beery goodness.
In fact I think I may be in love.
Part of Weird Beard’s Single Hop Series, it’s so refreshing to find a brewery doing the single hop thing without it being a Pale Ale.
Instead this is some whacked out, acid fried take on a Best Bitter, and boy is it bitter.
Pouring a deep dark burned mahogany with a load of cuckoo spit for a head, the smell is varnished dressing tables, rosemary and a hint of 1980’s patchouli soaked biker’s jacket.
The malt here is treacle toffee, toasted wholemeal bread, prunes and rum.
The Chinook hops swim about in this rich toffee mix wearing spangly trunks that sparkle on your tongue, all chewy cola bottles, spiced orange peel, HB pencil shavings and thick gunky pine resin that leaves a finish that sticks like tar but sears your face with its über dry bitterness.
If this beer was a person I’d desperately want to be their friend.