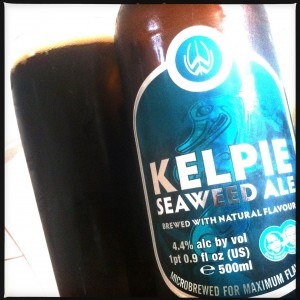 Kelpie is a Seaweed Ale.
Brewed with Bladderwrack, it supposedly replicates old Scottish coastal beers that used barley grown in fields fertilised with seaweed.
Having lived on the coast (of Cornwall rather than Scotland) I can categorically state that Kelpie doesn’t have, “an aroma of fresh sea breeze.”
It has an aroma of beer, mainly coffee and chocolate malts.
And that’s where the flavour’s at too, with light coffee and chocolate and a tiny hint of raisins, the only seaweed I can discern is not in the flavour but in the slightly unpleasant gelatinous texture.
There’s a very weak hopping that just about manages to provide a floral bitterness and the finish leaves a gluey residue on your tongue that doesn’t make me reach for my glass.
On the whole I like the beer that comes out of this brewery, but Kelpie is very disappointing.