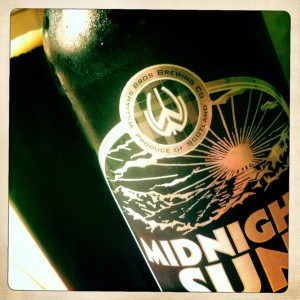 So this is a Porter with a bit of root ginger thrown in?
I have to say it works for me, helped in the first instance by this being a pretty good beer to start with.
It’s pours a dark brown with a light creamy head and smells of spicy chocolate and coffee.
The malts are toast dropped in wood fire soot, espresso and damsons, equally fruity and bitter sweet.
There’s a good autumn leaf and bark woodland earthiness to the hops, crunchy and dry, and the root ginger adds a spicy edge that doesn’t so much attack your senses as loiter in the background adding an extra dimension, the threat of spice heat without the full on assault.
I almost wanted to not like this beer, but instead I find myself enjoying it immensely.