There is a highway that runs through the heart of London. A waterway. But not the one that you may be thinking of. The Regent’s Canal is a hidden gem, home to a small fleet of barges and houseboats, it also provides Londoners in the know with a peaceful and often illuminating route to walk from Paddington to Hackney and beyond. 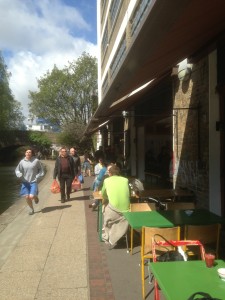 Saturday 4th of May. We need to get from Euston to London Fields in Hackney. We know the obvious walking route. It is the route of the Number 38 bus. But, if we have learned anything on our recent trips to London it is that the byways less walked frequently provide more delights than the obvious routes from A to B. So we almost stumble upon said waterway, joining it at The Angel and heading East. A towpath bustling with walkers, joggers and the occasional cyclist. We pass a mixture of buildings, modern housing mixed in with Industrial Revolution era workshops.

And ninety minutes later we find ourselves at the Mare Street exit. Leaving the tranquillity of the canal, heading into the bustle that is Hackney on a Saturday morning. Another find. This time a street market – Broadway Market to be precise. A mixture of shops, cafes, pubs and stalls selling everything from clothes to cupcakes, taking in bread and cheese along the way. No beer sales in evidence, sadly though. It keeps us enthralled for twenty minutes or so and lets us stock up with a couple of fine examples of charcuterie that will no way survive the two months promised by the stall holder.

But this is a sideshow to the main event. London’s Brewing has been hailed as the event of the London Brewers’ Alliance. Names such as Camden Town, Brodie’s, Meantime and Beavertown are bandied about. It promises to be a great event at what should be a great venue – London Fields Brewery’s own event space. Pricing is reasonable too, £15 has bought an advance ticket including the regulatory glass and nine pints worth of beer vouchers. What is not to like? 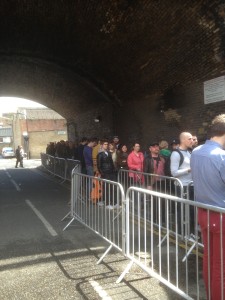 Well. Where to begin? With the queues. The venue is due to open at noon. There is a reasonable queue outside. But there are plenty of people coming out. Most of them workmen. There is going to be a delay. Not that the punters are given any information as to what the delay may be or how long it may last. Twenty minutes later and security are putting up crush barriers just in case the mass hoards of still sober adults fail to control themselves and stumble onto the teaming highway that is Mentmore Terrace – go on, Google Map it, you know that you want to. Opening is imminent we are told. Except that it isn’t. And it is raining. We are British. We are good at queues. But there is increasing muttering amongst the increasingly disgruntled, thirsty, wet and cold as we continue to wait in line. And finally the queue starts to move. It must be stretching back to the London Fields Brewery by now. Usually three or so wide, must be a few hundred people. The security men come down the line – those without tickets told to build a queue of their own – presumably they will be let in after the sensible forward thinking folk have been.

We get to the front. Tickets are collected, but not scanned in any form. I could have printed tickets for all of my friends as far as I can tell. Glasses in hand, a card to be stamped for our beers we head through a fairly narrow corridor. There are a couple of food stalls, a small sitting area. And a railway arch. Just the one. Teaming with people. Ten deep by ten wide or more. This is it. This is London’s Brewing. We look at each other. I grasp both glasses and head into the throng. Passing, I might add, the only people with drinks, the very same folk without advance tickets, let in well before the mass of people waiting outside. The lines aren’t moving. There is a sense of claustrophobia. And more people still to enter. How on Earth will they fit in? This is a venue for 50, not 500. 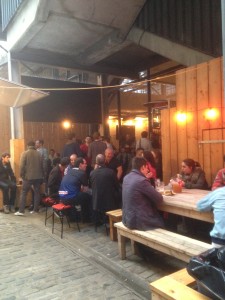 And so we search out an organiser. Not to complain. But to get a refund and leave. We have queued for the best part of an hour. We are out of the door in less than ten minutes. No drink has been had. As we walk away we look at the lines of folk waiting to get in. This is a shambles. London Brewers Alliance will have lost a huge amount of credibility and good will over this one. Twitter is alive with comments. Mostly to do with piss ups in breweries. But don’t forget that people have travelled distances to be here. It just isn’t good enough.

We head to the Cock Tavern, a short walk up the road and a recommendation from a couple of fellow #CAMRGB followers. Excellent selection of beers, a good few from the same breweries that we were hoping to enjoy down the road. And this is the effective Tap for the Howling Hops Brewery. An American Light Ale is taken, good hops, low 4s in the ABV stakes. A great starter. The pub is filling. With brewers and other beery folk. They have left London’s Brewing too. I chat briefly with a guy at the bar. Turns out that he is the man behind the Craft Beer London App. He is less than impressed with the level of disorganisation. I tell him that will will be putting his app to good use to rescue something from the day. And so it is, we have a couple more, including an excellent Milk Stout – Black Perle from Weird Beard Brew Co and an IPA Export No 1 from Howling Hops which, at 7.2%, ups the stakes a touch. This is a beer that I hated when I first had it. looks like slurry. Tastes of hops and nettles and is worth searching out. outside, The Heavens open. Then close. The bar is getting busier and we decide to head on. 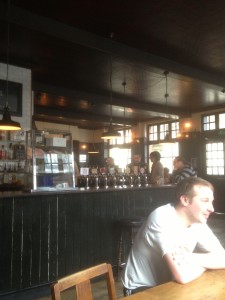 The Fox and Beavertown’s Duke’s Brew & Que we have visited before, but are excellent. Brodie’s and Redemption are on offer at the former – Hoxton Special IPA and Trinity. Duke’s is interesting. We noted last time that they served a lot of Thornbridge. They still do. Turns out that they have difficulty getting hold of their own beer. Odd state of affairs. I have a Beavertown Dark Saison which is pretty average and a BrewDog/Beavertown collaboration – Catherine’s Pony. An Imperial Smoked Porter. Not a bad effort, but Alaskans do it better.

Howl at the Moon is a new venue for us. Friendly staff, decent selection. I opt for a taste of Yorkshire with a Diablo from Summer Wine Brewery, an earthy mix of hops and bubble gum. May sound odd, but it works very well. As does the chicken kebab from over the road. Refuelled, we head West. And back to the canal. This will take us to Camden. Well Kentish Town really, which is where Camden Town Brewery does its thing. Somehow we slip into The Craft Beer Co in Islington. The day gets better and better, although the beer this time is Welsh. A Hop Angeles from Pontypridd. 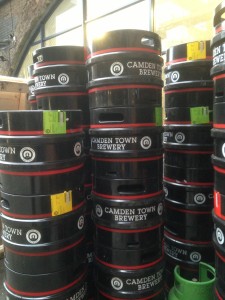 On to Camden Town. A compact but lively Tap. With a chuck wagon. Great vibe. Will come here at the start of a day pretty soon I reckon. Unfiltered Hells Lager sort of demonstrates how my tastes have changed as I have taken account of the London brewery scene when buying online. I also pick up a bottle of USA Hells for later – heard good things about this one. Home is beckoning. BrewDog Camden is en-route so it would be rude not to. Dogma is a big finish. It has been a great day. Not the one that we had planned, but a lot of boxes ticked and new tastes and places found.

On the train home the Twitter feeds are buzzing with news of London’s Brewing. Plenty of unhappiness. Some people having a great time. Forty minute queues for the bar. Mixed up lines. Pleased that we avoided it. As I write this on Sunday, it seems that the story is the same today. Will there be a London’s Brewing II? If there is, will anyone be inclined to risk it? Many seem to think that it is amongst the worst beer festivals on record, so we shall see.

Did I mention that we walked fifteen miles?

11 Responses to Every Cloud (London’s Brewing)