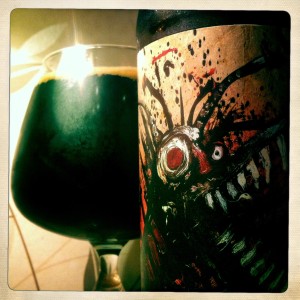 Now I wanna be your dog.
Stephen King’s books are never adapted for film very well.
Kujo is a case in point.
I remember excitedly hiring the video (remember them?) from the one rental shop that’d let us take movies without asking our ages.
It was a twenty minute BMX ride away but it meant watching The Exorcist and Mad Max and The Hills Have Eyes before I legally should have.
If all Stephen King’s books had been made into beers instead, and all the beers were made by Flying Dog, I’d be a very happy chap.
Kujo pours an impenetrable inky black and smells of prunes and burning tyres.
As I take a swig there’s an enormous plum compote doused in rum with a bran heavy biscotti to dunk in it.
There’s thick black treacle too, and a fistful of raisins.
The coffee sloshes about in the background, full of caffeine but not in your face, instead it’s eye bulgingly sobering and wakes you right up so the hops can slap you with their red wood leaf litter crunch and lemon rind, pine resin and smoky bacon crisp flavouring tongue tugging goodness that leads to a sticky toffee finish that’s bristling with bitter dry bark.
Woof! Woof!