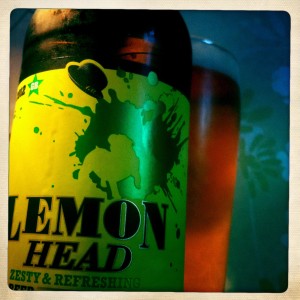 I was never a fan of Evan Dando or his band, Lemonheads, and when I opened this the smell made me think I wasn’t going to be a fan of this beer.
You see, this beer smells of cheap lemonade.
It’s all overpoweringly synthetic lemons.
But then I took a swig and started to think that this light Golden Ale might be alright after all, as I was pleased to find a light straw and rich tea biscuit malt, and some green leafy hops.
The ginger adds a gentle heat in the background and so to begin with everything was OK.
But as I drank further this beer started to taste like it smells.
The lemon becomes overbearing and tastes for all the world like some cheap flavouring instead of the real lemon juice that I’d hope is used, and by the end I’m afraid it just tasted like a cheap novelty alcopop beer hybrid.