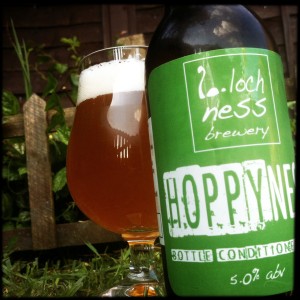 This begins as a beautifully refreshing little beer for the warmest day of the year s far.
Hoppyness pours a sunshine and straw yellow with a bubbly head and smells of grapefruit and apricots on a bed of cut grass.
This is a hop forward beer with lots of green juicy hazel stems, tart lemon zest, some kiwi and lime, and a touch of peach.
But as I work my way down the glass there’s something distinctly missing.
There’s a lack of body here, not enough malt to back up and flesh out the albeit lovely hops.
There’s the vaguest trace of something cereal based and biscuity and I’m afraid it’s not quite enough, and leaves the end of this beer feeling a little too astringent, even for a hop head like me.
It’s certainly been named perfectly, but a little more malt would add to my happiness with Hoppyness.