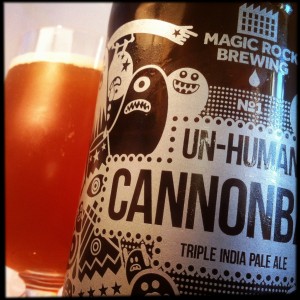 Where to start?
I may just ramble.
This is every bit as special as I hoped it would be.
If you remember back to 2011, Magic Rock won CAMRGB’s first Beer Of The Year Award for their Human Cannonball.
Well this puts that beer to shame.
Un-Human Cannonball is HOP PORN.
It’s Eau De Hop, pumped full of eye bulging alcohol.
It’s also rather frighteningly presented in a 660ml bottle.
I mean, a bomber!
Of 12% beer!
That’s just asking for a silly review, so let’s start with the smell.
You know when you go on a brewery tour and you’re given a tiny pile of hops to sniff and when you do it’s heavenly?
Well this brewery tour would involve the Head Brewer stripping you and forcing you into his Room Of Hops.
Once you fight your way out of this intensely resinous, fruity bitterness, if you manage to, you’ve won the ticket to the drug fuelled Willy Wonka tour of Magic Rock’s brains.
The Room Of Mouth Gluing Toffee has flame throwers around its walls ensuring a crisp bitter burned sugar at the edges.
The Room Of Malty Biscuits is a sky full of honey coated Lancasters carpet bombing softly sexy bran flakes.
But every corridor leads back to The Room Of Hops and you just can’t help yourself.
Un-Human Cannonball is seriously, stupidly super.