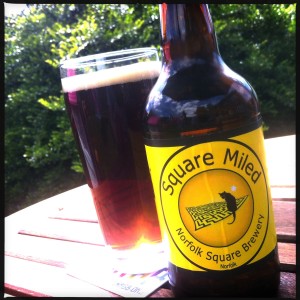 Mild, Mild, Mild.
Inoffensive, polite, totally unexciting.
Norfolk Brewery have made a decent Mild as it goes, but I find this style so hard to be enthusiastic about.
And for fear of the dreaded trolls I think I’ll let the other beer organisation continue to champion Mild.
The smell of Square Miled is a bit biscuity and a bit chocolatey.
And that’s pretty much how this beer tastes, biscuity and chocolatey with just the merest hint of hop bitterness towards the end.
For me Mild is the uncle that endlessly tells the same jokes at family gatherings and looks leeringly at your cousins until he’s ushered out to the pub here he drinks Mild and tells the same jokes while leering at the barmaid.
Boring.