Piss Up In A Brewery.

Hello.
My name is @hippy_jon and I would like to tell you a little story.

Last Saturday I found myself in a yard behind a small brewery in Wellingborough. I was watching a punk by the name of “Davey Granules” ride a six foot tall bicycle round a homemade wall of death. I had a pizza cooked in a wood fired oven on the back of a Bedford Rascal in one hand and a pint of beer containing a teabag in the other. I was about to listen to some live music and I had just met a real life American. It was a great day 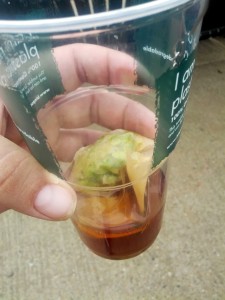 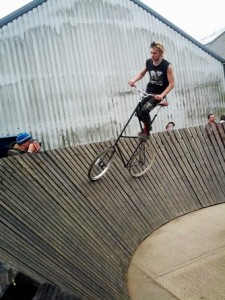 Punk on a bike

My story starts two and a bit years earlier.

Back then my idea of a good beer was a pint of that beautiful Belgian brew Stella Artois. Then, on May the 8th 2011 something momentous happened. I gave up smoking. Don’t worry I am not about to preach about it. Over the next few weeks my sense of taste started to return. Everything I cooked, ate or drank changed. I came to realise I had favoured things that had a strong taste, whether it be good or bad it had to be strong. I soon realised that draught lager in a pub would no longer cut it for me. I started to experiment with “real ales”, some good, some bloody atrocious and some absolutely mind numbingly amazing. I fell in love with beer.

This love affair has continued. I read some reviews of beers where people go on about “nose” and other such malarkey. These reviews used to scare me off trying to describe my opinions and share with others. Leave all that stuff to the experts. If I like a beer, I like it. If I can taste caramel or gravy or sump oil in it then that’s an added bonus. I enjoy it for what it is. Beer. I like to talk about it, I like to drink it, and I enjoy sharing it with others.

Around the same time I found out about proper beer I also discovered Twitter. The two seem to go together. I started following a few local and not so local breweries. Some made ace beer but were rubbish at twitter. Some were brilliant at twitter but the beer….Oh dear. A couple hit all the buttons then offered me the chance to hold my plums and have a nudge.

One of the nudgers was Hart Family Brewers. Somehow our paths crossed, I sampled their wares and enjoyed them. They adopted me as their resident hippy. I even recommended them to a local wine merchant who now stocks their brews. It only seemed fitting that I should attend their first birthday bash.

There was to be beer, live music and a bicycle wall of death. Yes, I did say that. A BICYCLE WALL OF DEATH. They had even brewed a beer especially for the occasion. Bomberdrome, served with an optional tea bag of hops. Sensational. Leave the bag in as long as you want, adjust the flavour to your own taste. I now know I love a seriously hoppy beer as I left it in right to the end, then ate the bag. And the glass.

The whole event was fuelled by a love for Pure Beer, brewed with a passion for quality and taste. A few hundred people all drinking beer and having a great time. Imagine this happening in a pub full of @hippy_jon`s two years ago. Nope. 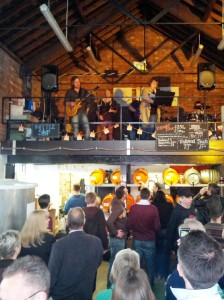 All in all it was an absolutely brilliant day. Amazing beers, good food, lovely people and great live music. Oh, and the BICYCLE WALL OF DEATH, did I mention that?