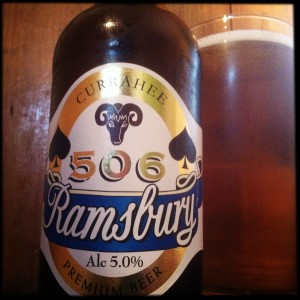 I’ve just noticed that not only are Ramsbury based in Marlborough, Wiltshire, but their beer uses water from the once-upon-a-time sacred Kennet Valley, home of the West Kennet Long Barrow,  Silbury Hill and the wonder that is Avebury.
This is just about my favourite part of England, crammed with arcana, this landscape was where I saw my first crop circle, an enormous formation on the slope leading up to the aforementioned Long Barrow.
All this makes me like Ramsbury even more and I suppose shows me up as a bit of a crypto hippy.
But I used to spend a lot of time and exploring around that particular piece of countryside.
Anyhow, this is a beer review, so 506 is named after a Parachute Regiment that was stationed locally during World War Two.
It’s a crisp clear straw coloured Pale Ale that smells of peaches, honey and garden flowers.
And that’s pretty much where the flavours start.
There’s a big fruity apple juice and caramel malt, with honey and brioche and a sprinkling of white pepper.
The hops are sharp and bitter, with lots of mown lawn clipping greenness, hazelnut pithiness and a lemon zest zing that leads you to a soft and sweetly dry finish.