Them Sour Belgians! (Tongue Twisting On Twitter, Or An Evening Of Lambic Beer) 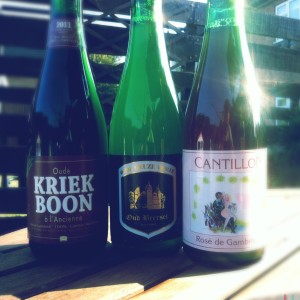 Last night was Lambic night and an evening of sour beers shared across Twitter.
We didn’t have quite the turnout we’ve had for some of our other Twitter events but then that’s not surprising given the beer style isn’t everyone’s cup of tea and can be, for some, rather challenging.
In fact only a year ago I would have turned my nose up at Lambic beers and told you they were horrible sour monsters.
But our tastes change and we should challenge ourselves, and over the course of the last year I have not only got my head around Lambic beer but have grown to really love it.
As long as it wasn’t fruity.
Up until last night I’d still have turned my nose up at Krieks.
Knowing that an evening of Lambic beer would be a challenge for some I decided my challenge would be Lambics brewed with fruit.
In the past the fruit beers I have tried have been heavily sugared, or at least tasted that way, and were far too sweet for me.
It was exciting to find that not all of them are like that and that the two I got hold of were anything but sugary.
I opened my first bottle at around 7.30 and said cheers to Twitter.
There were one or two people already drinking and we exchanged a few thoughts on what we had in front of us.

I decided to dive in at the deep end with a Cantillon Rosé De Gambrinus (5%) and what a beautiful colour it was, a sensuous pink that just asked to be indulged in.
The smell was red fruit on a bed of silage, which I admit isn’t perhaps the most appetising when written down but believe me, it was great up my nose.
Rosé De Gambrinus is sour with a capital SOUR.
It’s all horse manure, battery acid and mushroom infested straw.
But then fresh raspberries sneak out and kiss you gently and fondly, wiggle their bobbly bits at you and slink off before you get to see them close up.
This is probably the most hardcore Lambic beer I’ve had, with lots of bitter dry sourness slapping your face inside out while the pretty berries smooch you.
As more people jumped on to Twitter and opened their beers I reached for my next bottle and went with something a little softer, and something that I know and love, an Oud Beersel Brouwerij Oude Geuze Vieille (6%) which I’ve reviewed before but I must just mention that after the first beer this one took on a softer, rounder flavour with lots of hints towards Saison.
There was sourness yes, but there was also a light creamy spiciness and a little spun sugar lurking right in the background.
And that was a very pleasant surprise.
Talk on Twitter turned to likes and dislikes and one or two people just didn’t like what they were drinking at all, but even those that did had the oddest things to say about what they were drinking, including, “Cherries and old socks.”
Should that be a description of something pleasing in your mouth?
I’m not sure.
My next beer was, I thought, going to be really challenging as it was an aged Kriek, but I was completely blown away by it. 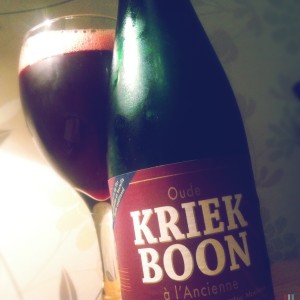 Brouwerij Boon Oude Kriek Boon (6.5%) was a million miles away from the fruit beers I’ve found in supermarkets. It poured like the supermarket horrors, all blood red with a pink head, but the smell was delicious blend of sour cherry skins and warm damp straw.
It was hard to take a mouthful without my lips curling back and my gums retracting as this was extremely sour, and probably more so after the softness of the previous bottle.
And where the cherries are glacé sickly in the supermarket beers, here they’re underripe and almost green, sharp with orchard leaves and nettle stings that leave the most extraordinarily dry and bitter finish tainted with subtle cherry flesh redness.
By this point it was getting late.
For me at least, I’m usually in bed before 10pm.
I am a lightweight.
But Twitter conversation was flowing.
Someone had asked if English brewers had copied the style and they were quickly pointed in the direction of Ole Slewfoot and Durham Brewery, both of whom (amongst others) have tried their hands at sour beers.
And this got me thinking about something.
Something that had been mentioned to me before by a friend who had forwarded me a link to a rather funny and a little too close to the bone article on beer geekery. 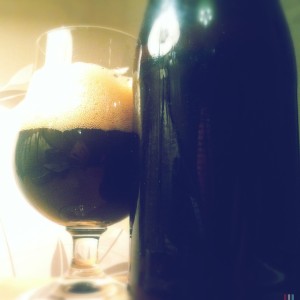 And my bottle of Comm.Unique Sargasso (?%) is a case in point.
You see this is a home brewed and accidentally sour stout.
And it raises the question mentioned in the above article.
When is sour not a mistake?
Beer geeks, myself included, will pour away a “bad” English beer but drool over a Belgian Lambic.
And yet…
And yet the profiles of this beer aren’t a million miles away from the Belgian beers I’ve just been enjoying.
Sargasso pours a deep dark purple black with a big fluffy cappuccino head.
The smell is coffee and yeast and Imperial Stout Goodness.
But when you take a swig there’s a big sour wash that stamps on your tongue.
Underneath it there’s digestive biscuits and raisins, chocolate and rum.
So the question is this.
Is this beer bad or is it accidentally brilliant?
You see, drinking it alongside all these Belgian classics, Sargasso fits in perfectly well and yet I know it wasn’t meant to taste like this.
Go figure.
By about 11pm I was more than a little tired and after a few cursory goodnights I sloped off to bed happy that, although there weren’t the amount of people taking part that we had for, say, the IMperial Stout evening, those that had taken part had had a good old natter, drunk some seriously interesting beers and had fun getting a bit drunk together.
Right now I’m off to have my face put back together and my tongue untwisted.

Thanks to everyone who took part, it was a big sour blast.

2 Responses to Them Sour Belgians! (Tongue Twisting On Twitter, Or An Evening Of Lambic Beer)