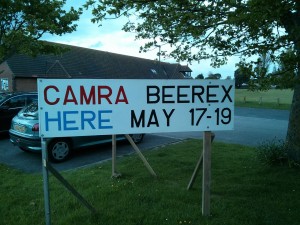 For the past few years now myself and a group of friends hire a place to stay in the town of Yapton. A strange place to stay you may wonder but in May each year Yapton holds the West Sussex branch of CAMRA’s beer festival commonly known as known as “Beerex”.

We now have a regular pattern attending the opening Friday evening, the early Saturday and the Sunday mopping up sessions with visits to Good Beer Guide pubs in Yapton and nearby Littlehampton in between. The Beerex is held in a 1980’s purpose built village hall located next to the village green with cash being exchanged for “beer tokens” plus you get a free half pint glass (no pints here!). Tickets are £5 per session (Sunday is free but you have to pay a quid for your glass) and CAMRA members get £1 (!) worth of free beer tokens at each session.  So after a tasty supper of saveloy and chips we were ready to get stuck in!

As an exiled Eastender I was glad to see three East End Breweries having their wares on offer. I sampled the Citra (3.1%), Kiwi (3.8%) and Old Street Pale (5.0%) from Leyton’s Brodies inbetween a fine half of Jamboree (4.8%) from the East London Brewery (Leyton) which is blended with wheat, lager and pale malt resulting in a pleasant bitter and almost fruity taste. I also had a Golden Ale (4.0%) and American Pale (4.5%) from the Hackney Brewery. As you may have rumbled by now I am a fan of golden and hoppy beers but next up was Black Swallow (6%) from West Sussex Brewery Langham which was a black IPA brewed with three types of American hops and was full of flavour (toffee, fruit, chocolate). It more than made up for the lack of their Hip Hop which has been my beer of the festival for the past two years.

It was then back to “London” with Tottenham’s Redemption Brewery’s excellent Trinity (3.0%) which proves that low alcohol beers can taste absolutely wonderful. It was almost time to sup up so I had a slightly disappointing Sussex Wild Hop (3.7%) from Harveys and the session was finished with a shared bottle of Geuze Mariage Parfait (8%) from Boon. A lovely beer to end a great evening. 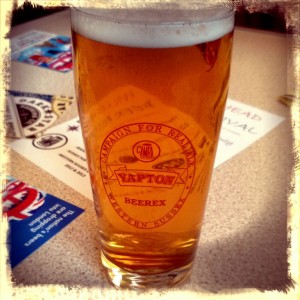 And so to Saturday. Feeling remarkably refreshed (unlike the Cider and Perry drinkers in the group) we set off once more at midday. The Saturday session now runs from 11pm to 5pm and both the hall and village green were pretty busy when we got there. I did intend to stay off the golden beers but that idea all but evaporated when I saw the Baseline Halcyon Hop Haze (4%) which was impressionable to say the least.

I moved onto the other two East London Brewery beers on offer in the shape of Pale Ale (4.0%) and my first stout of the festival in the form of Quadrant (5%). Moving over to “West London” I tried Moncada’s Notting Hill Amber Ale (4.7%) which was awash with flavours and the Notting Hill Porter (5.0%) which was truly outstanding combining coffee and chocolate.

As I now live in Essex I tried the Mersea Island Island Gold (4.7%) which was near to a cask lager as can be but couldn’t compare to the long lasting tastes of the previous two beers. Finally it was back to the bottled beer stall for a bottle of Viven Imperial IPA (8%) which is a Belgian version of an American beer. Bitter, floral and lovely. We then headed off after 3pm for our pub visits but that’s another story!!!

Sunday is the mopping up operation and we popped in for a couple – it would have been rude not too! I started with local beers in the shape of Downland’s Truleigh Gold (3.7%) and then Langham’s LSD (5.2%) but neither impressed. Just in case by taste buds were all but done I turned by attention to Redemption’s Hopspur (4.5%) – remember they are based in Tottenham – and back to Langham’s for the Black Swallow (6%) both of which refreshed the palate nicely. I finished with Milton’s Icarus (4.5%) which was a staple pint when I used to drink in the Pembury Tavern in Hackney but I haven’t seen it since. Last orders finally went and then the volunteers manning the stalls deservedly helped themselves to the remaining beers filling up plastic bottles of various shapes and sizes.  I noticed one fella filling up his bottle with more than one type of beer – Yapton cocktails anyone?

Once again the Beerex didn’t disappoint and we are already planning our visit next year which takes place between the 16th and 18th March 2014. A big thanks to the West Sussex Branch as ever and I whole heartedly recommend attending if you ever get the chance.